EAPL Ranks Again as the Best in the Nation 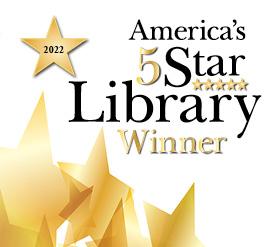 According to Crystal Steker, President of the Library Board of Trustees, “This award is truly a reflection of a community which uses and values our library. I want to thank the entire library staff for continuing to provide the resources, programming, and excellent service our residents want and appreciate.”

The 2022 5-star designation announced this month is based on FY2020 data from the Institute of Museum and Library Services (IMLS) Public Library Survey (PLS). Star distinctions are awarded using public library service output in seven areas: checkouts, visits, program attendance, public computer uses, wi-fi sessions, database retrievals, and library website visits. To compare libraries only with their peers, the ratings group them by budget range, then assign the top libraries in each category a 3- to 5-star rating based on their overall score. Ela Library placed in the top 10 nationwide in the $5-9.9M category.

Nationally, 258 libraries received star ratings based on data reported from 5,359 public libraries. This was the lowest number of libraries scored ever due to the first year of the pandemic and varying 12-month reporting periods. Nonetheless, 2022 marks the 11th year that EAPL has received a star rating. Illinois leads the nation with the most star libraries followed by Iowa.

To commemorate, join us for a 5-Star “Thank You” celebration and the kick-off of EAPL’s 50th anniversary on Monday, January 9 from 5-8PM at the library. See a magnificent luminary display in front of the building while enjoying hot beverages and delicious treats, while supplies last. All are welcome!

Library Journal is the oldest and most respected publication covering the library field. Find the full list of LJ Index star-rated libraries and more information at LibraryJournal.com.